Not receiving results from your current web content? Can't find the right words? Try MSEDP's extensive SEO Service. As a top SEO Company on Long Island, New York, MSEDP will get you to the top of the Search Rankings. Even though our company is located on Long Island, we work with websites nationwide!

To be effective, your website should be accompanied by powerful, attention-grabbing content. Our professional writers will research your business and target market to create original text which will convert prospects into clients. We will also fine-tune your existing content.

Sites with content that clearly represents a topic will rank higher in search results on that topic. People are more likely to click on sites near the top of the results. Search Engine Optimization is the art of raising your company's ranking in search results. Our writers have a clear understanding of SEO tactics and will use selected keywords throughout your site to attract searchers looking for your product or service.

To properly build and maintain a website, both of these aspects must intertwine. You can't have one without the other and it is imperative for each of these aspects to work together in order to ensure your site is properly ranking in google.

The content, in general, should be specific and tie into the proper keywords. Having an organized website, in terms of keyword management, is vital in the eyes of Google. They reward sites based on those merits. However, Google also penalizes websites that abuse their metrics, which is why it is important to properly build a site and its subsequent pages.

Our professional writers are recruited from top magazines and marketing agencies. They can prepare content for any business communications:

The Mechanics of SEO

The Mechanics of SEO

Competition from other websites is the prominent factor that plays a role in determining where your site is ranked for a specific keyword. Depending on your industry and location, there is a strong chance that you’ll be targeting a keyword that represents a product or service that is sold by dozens, if not hundreds, of other businesses.

Read More
If your SEO is just getting started, keep in mind that other websites have already been optimized for months or even several years. This is why organic SEO takes time, work and patience. However, there are effective techniques that create posts which are friendly to Google's ranking systems. The way Google handles the SEO for each site can differ, which is why it is important to have an expert helping to put fresh new content. At MSEDP, we have a great understanding of what can help your site rank higher and what can hurt it. And despite being located on Long Island, we help small businesses across the country and offer them unparalleled SEO services.
Contact Us Today

Think of the process as an ongoing marathon, like a driver joining an Indy 500 race that is already in progress. The other cars have already been in action around the track for several laps, while your car is just getting started. They’ve had a big head start. Some cars may breakdown or make a pit stop and eventually you’ll be able to surpass them. Others cars will be well-built machines with a pit crew that has perfected maintenance on the engine and other working parts. It will be difficult to pass these competitors, but over time you can get pretty close.

Read More
In the case of SEO, some websites have been competing within their market for several years. They already have built upon credibility, authoritative links to their site, and plenty of relevant content. Huge companies, such as Home Depot, Nike or Apple, are already established and have the money to continuously invest in campaigns.
Contact Us Today

Example of a Successful SEO Campaign

Example of a Successful SEO Campaign

Irving's Recyclables is a local Long Island business that buys a variety of metals, as well as automobiles. "Long Island cash for cars" and "Long Island scrap metal" are two competitive keyword sets for which we optimized. By carefully constructing organic SEO content through several months, we were able to greatly improve rankings for the site. The business now receives inquiries about scrap metal and vehicles on a regular basis for their Long Island, New York services. 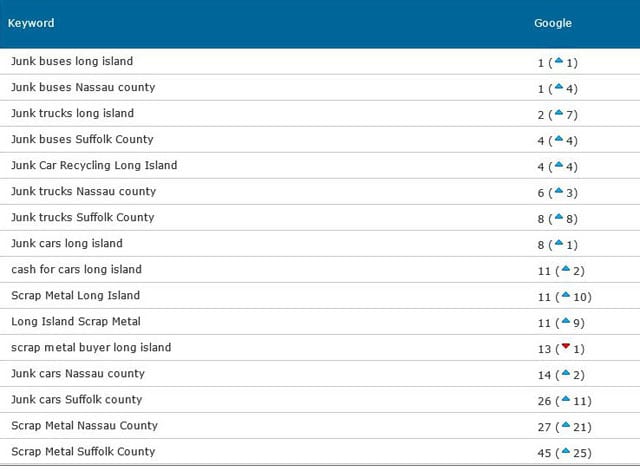 Call Today For More Information About How SEO Services Can Help You!

If you are interested in our SEO services, please call us today to learn more about how we can help. We love to work with companies across Long Island and in New York, but our services span the country and we are happy to produce quality content for small businesses everywhere. Our number is 631-761-7600. Please contact us today to get your website noticed by Google! We will talk with you to discuss an effective SEO campaign for your business and keep you up to date on the progress the site is making as well. We pride ourselves on having effective customer service with our clients. We look forward to helping your business grow.